It’s the most disturbing question I get.

Why? It’s the wrong question. It tells me that they don’t have the foundation of financial intelligence required to use their money well if they do—somehow—become wealthy.

If you’re interested in learning about how to increase your wealth and keep it, I strongly suggest you check out my brand-new Weekly Cash Flow broadcast. In it, I explain to the audience why everyday folks like you face roadblocks on their quest to get rich. I also reveal a never-before seen way to collect passive income, boosting your cash flow every week…

There are dozens of rags-to-riches-to-rags stories about fallen stars and historical figures who died dead broke. Lottery winners are a prime example of such stories.

Lottery winners are more likely to declare bankruptcy within three to five years than the average American, according to a report from MIT.

Economist Jay L. Zagorsky agrees. He writes for U.S. News and World Report: “Studies found that instead of getting people out of financial trouble, winning the lottery got people into more trouble, since bankruptcy rates soared for lottery winners three to five years after winning.”

Shockingly, the stories of rising then falling from the top aren’t just about average folks who had some luck. Some of the most successful businessmen have also lost it all.

The following comes from a Forbes article, “The Nine Financiers, a Parable about Power”:

Legend has it that in 1923, a group of some of the greatest leaders and richest businessmen at the time held a meeting at the Edgewater Beach Hotel in Chicago, Illinois.

Forbes contributor, Joshua Brown, said, “The life of a professional speculator is an unpleasant one, filled with highs and lows but ultimately unsatisfying an, in all probability, mentally ruinous. Look no further than the example of history’s greatest speculator for proof of this.”

Be Careful Who You Idolize

Life and success seem easy for some people, but I do not know any of these people. As my rich dad often said, “Success requires sacrifice.” I have yet to meet a successful person who didn’t sacrifice tremendously for that success.

For example, medical doctors pay a steep price in terms of time, money, energy, and relationships to become doctors. So, do most high-performance athletes, movie stars, music idols, political leaders, and social leaders. Success in investing is no different.

Sacrifice is the price a person pays for success. Unfortunately, most people are not willing to pay the price. It is easier to be average, comfortable, safe, secure, and live life just below success.

Most people are too focused on making money. What they should really be focused on is their financial education.This is because while money is great, you can’t become truly wealthy without a sound financial foundation—and you certainly can’t keep your money.

Rich dad said, “If you want to be rich, you need to be financially literate.”

The problem with most people who want to get rich quick is that they’re trying to build the Empire State Building on a six-inch slab of concrete. They haven’t gone deep. They don’t have a firm, financial education to shore up their financial foundation. Thankfully, my rich dad took the time to teach me about money and poured a strong, financial foundation for my life.

And the number one rule he taught me was: “You must learn the difference between an asset and a liability and buy assets.”

It’s so simple a rule that it’s almost anticlimactic. But, if you want to be rich, this is all you need to know. It’s rule number one. It’s the only rule.

My rich dad gave me a very simple definition of an asset and a liability.

I find this is best understood by looking at the following pictures. 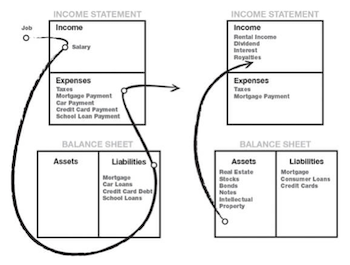 If you want to be rich, I encourage you to begin investing in your financial education today. And your first assignment is to begin studying the differences between assets and liabilities.

By building this firm foundation, you’ll understand more about money than 99% of the world and be on your way to not just getting rich and making money but keeping it too.