The Final Gold Rush: Make a Fortune on the $35 Trillion Arctic Mining Boom

The final gold rush gives you the opportunity to take advantage of Arctic gold mining plays that could skyrocket during this last big phase of gold exploration in the world. In this urgent report, Jim and Dan have identified his top 3 “Last Frontier” gold mining picks to potentially 20x your money or more, as well as how to allocate these stocks for a top-performing portfolio.

You Must Be A Subscriber To View This Content.

If you are already a subscriber, click the login button below to get access. Not yet a subscriber? Checkout our publication below and get access today!

James G. Rickards is the editor of Strategic Intelligence, Project Prophesy, and Crash Speculator. He is an American lawyer, economist, and investment banker with 40 years of experience working in capital markets on Wall Street. He was the principal negotiator of the rescue of Long-Term Capital Management L.P. (LTCM) by the U.S... 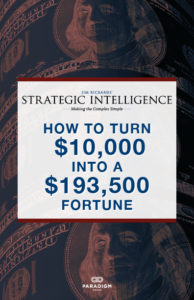 By now, you’ve seen Jim’s prediction that global elites are planning to nudge the U.S. dollar off its perch as the world’s reserve currency. Once these plans go live, it could have a huge impact on the dollar. The loss of reserve currency status will make it much harder for the U.S. Treasury to sell bonds to fund its budget. We’ve identified a series of three trades that could result in gains as high as 1,170% over the long-term. Updated: March 2019 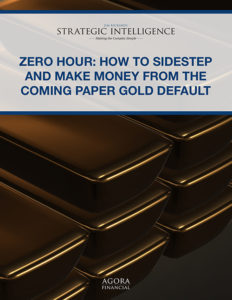 Zero Hour: How to Sidestep and Make Money from the Coming Paper Gold Default

Jim recently visited Switzerland and had dinner with the head of the largest gold refinery in the world. He revealed just how tight the physical gold market is… 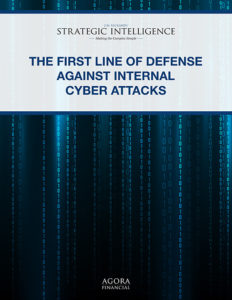 The First Line of Defense Against Internal Cyber Attacks

A lot of cybersecurity focuses on keeping hackers out — using protective software to identify and repel attacks on a computer network. But that ignores a much bigger risk… attacks coming from inside the network itself, which is called privilege escalation. Luckily, more and more companies are recognizing the threat privilege escalation has to become. But they’re also discovering that very few companies specialize in preventing it...like the one featured in this report. 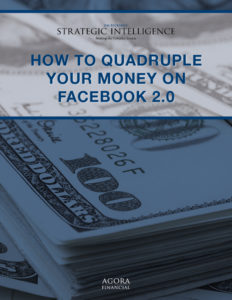 This “ultimate hedge” can actually feed off Bitcoin volatility. And it doesn’t matter if Bitcoin is crashing or soaring. The key here is just volume. As long as lots of Bitcoin trades hands, that’s good for this clever investment. And no, I’m not talking about buying risky new Bitcoin derivatives. This is a much safer move. It even pays dividends. You can read all about it in a special bonus dossier we’ve put together. 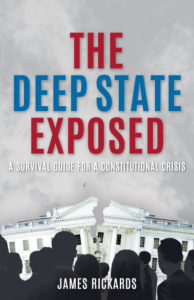 You’re probably tempted to believe that the immediate shock of Trump’s victory has worn off. You might hope that the White House would fall into a businesslike routine now, and the opposition would die down. Nothing could be more wrong. Across the country, over 35,000 operatives and $40 million are being used to wage war on Trump. In effect, the deep state has mobilized, and American politics will remain in its current dysfunctional state until either President Trump is politically disabled or his opponents are politically sidelined.

As we’ll explore, the last thing you want to do is buy a precious metals ETF. Instead, set up one of these three easy solutions. We tell you how to buy gold, whether it’s bullion or coin and where to store it.