The last several weeks have been my most active period of trading in more than a decade, which isn’t a coincidence – I only get really aggressive during major bouts of volatility.

She had most of her money parked in cash at that time, and I could sense we were a lot closer to a market bottom than a market top so I purchased 300 shares of the Vanguard Total Stock Market Index ETF (VTI) at $34.36 apiece.

While there was no way to be sure back then, my timing was pretty darn good – March 9th had marked the absolute market bottom during the financial crisis.

And what has the ETF done since then? Take a look … 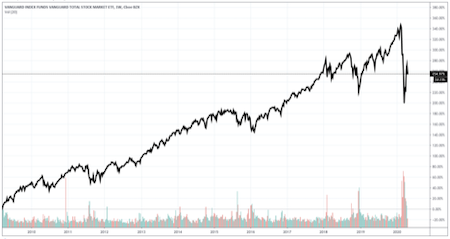 At the absolute top of the market before the COVID crisis, it was up as much as 340% … but even after this recent bounce, it’s still up more than 250%.

How can this be possible when the ETF itself has never risen that much?

And why would I decide to cash out now?

Let’s start with the first question.

How To Make Compound Returns Hassle-Free

When I initiated the position roughly 11 years ago, I requested that her dividends be reinvested into additional VTI shares.

That simple action of accumulating more shares with the ongoing income caused her total share count to rise to slightly more than 373 over the ensuing 11 years.

In other words, my wife’s stake in the VTI increased 24% automatically!

You’ll often hear people say the best returns come from time in the market rather than timing the market.

Well, in this case, it’s both.

But why wouldn’t I just let this position continue to run higher? Why am I deciding to cash out after the bounce?

As I’ve been telling you, I don’t believe the odds are in favor of more short-term gains … at least not substantial ones.

To be sure, I could be wrong. In which case, we might miss out on another 20% or 30% if the indexes return to prior highs.

At the same time, look at this chart of the Wilshire 5000 index’s market cap divided by U.S. GDP … 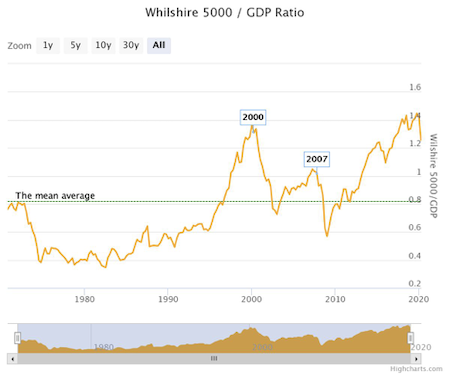 This particular relationship is one of Warren Buffett’s favorite valuation tools and as you can see, we are still in nosebleed territory. In fact, we are still higher than the last financial crisis peak!

Do I want to be a major owner of stocks at these prices and with so many uncertainties out there right now?

You’ll also notice that even Buffett himself has been notably quiet during the recent volatility.

That’s a major departure from past crises when he was writing opinion pieces about betting on America and taking large stakes in battered businesses.

“I would say basically we’re like the captain of the ship when the worst typhoon that’s ever happened comes. We just want to get through the typhoon, and we’d rather come out of it with a whole lot of liquidity. We’re not playing ‘oh goody, goody, everything’s going to hell, let’s plunge 100% of the reserves [into buying businesses].”

This, from a 96-year-old investing legend who has pretty much seen and done it all!

Call me crazy, but I’m with Charlie.

However, my general feeling is this is a time for reducing your overall risk and increasing liquidity.

I believe it is more likely that this is the eye of the hurricane than the end of the storm.

And as I’ve just shown you, this wouldn’t be the first time I’ve correctly identified a major turning point in the markets.

3 Things Will Lead You to Financial Ruin

When the next crash comes it could cause financial ruin for the middle class and the poor. And it’s all because of fake money, fake teachers, and fake assets. To save yourself, the first step is to get a real education... 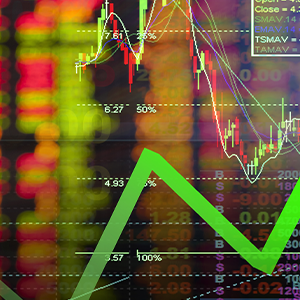 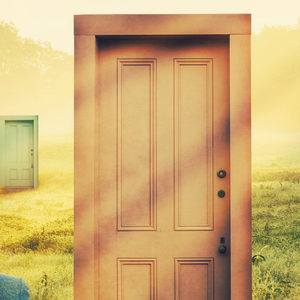 Believe it or not, now is the easiest time to get rich, but it’s all about finding opportunities.

Bang! What a Payroll Report!