Just today and tomorrow to get through…

How You Feel About Bitcoin Depends on Your Entry Point

“How are you feeling?”

It’s a common refrain in London and elsewhere in England.  I always marveled at how non-American English speakers used so much more of the language, and colorfully so, than Americans do.

Just for a goof, I plugged those numbers into an Excel spreadsheet and here’s what I got:

On the face of it, it’s an intolerable level of volatility.  But for reasons I hope to make you understand, it’s just not that big of a deal for the “New Aristocracy.”

Perspective is Everything – And That Means Your Buy Price

This is a chart of Bitcoin year-to-date.  I’ve added the percent changes in there for clarity.  If you bought Bitcoin on New Year’s Day and held it until mid-April, you would’ve reaped nearly 138% in gains.  How good you would feel!  How vindicated!

After that, the deluge (to butcher Louis XV’s phase…).

From the mid-April peak until now, you’d have surrendered 43.1%.  Ouch!  You’re still up for the year, for sure, but it doesn’t feel nearly as good.  And if you took out a loan to buy your Bitcoin, the pain you’d feel is palpable.  As Sir Alex Ferguson would say, “It’s squeaky bum time.”

But we must put this into context.  If you were an early adapter, and laughed at the goldbugs as unintelligent Luddites, this year’s moves pales in significance to what you’ve already gained.  I’ve left this year’s percent changes on the charts so you can see just how irrelevant they are to people who bought in the low triple digits and below.

Let me quote a Facebook friend, anonymously. He’s been in crypto since Day One, for all intents and purposes:

“As I have stated earlier, a good shakeup after such dramatic rises as seen in the crypto markets over the past 12 months – is healthy. It shakes out the weak hands, it collapses leverage – and sends the casual and insincere partakers packing – potentially to Mars. Having been in the space since the very beginning, I am so infinitely tired of the experts and cheerleaders, who appear during bull markets, and who equally rapidly disappear again. To echo a much used quote: ‘Crypto needs no Kings.’”

He also said he took the opportunity to add to his position.

And why not?  That’s exactly what Uncle Warren would do:

Ok, we can argue about the “solid business” bit.  But Coiners genuinely believe that Bitcoin is the way forward.

“Trading is the Act of Becoming Inhuman.”

It seems so easy, but 97% of all investors lose money.  That’s right, they’re the donor class.  They donate their hard-earned, after-tax income to those who’ve somehow figured out how to make money consistently in the markets.

If you ask most traders, they won’t give you an indicator they use, or the people they listen to.  Traders talk a great deal about controlling one’s emotions, mindset, and continuous improvement.

Which brings me to the reason why the Bitcoin volatility affects some more than others.

Far from being some pedant lecturing you on how to keep a stiff upper lip – something Brits no longer have the ability to do anyway – I’ll share my journey from emotional basket case to (more) level-headed investor.

Or at least, richer.

I often wondered why I didn’t have as big a brokerage account as I’d like.  I worked at one of the world’s largest investment banks as an institutional broker, and still couldn’t seem to build up my winter supply of acorns.

I found comfort in what Renaissance Man and all-around genius, Nassim Nicholas Taleb, once wrote: 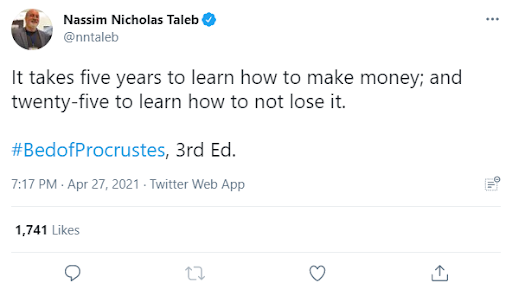 And funnily enough, as I approach my 30th year working, I’m getting much better at not losing it.

But I needed to dig deeper, to find out what I was doing wrong.

Before I go there, let me say this: if you haven’t read any of Taleb’s books, you should.  They help make sense of a crazy world.  The books are Fooled By Randomness, The Black Swan, The Bed of Procrustes, Antifragile, and Skin in the Game.  (Leave Dynamic Delta Hedging out unless you’re already a seasoned options trader.)

A book I picked up, really enjoyed, and helped me was The Mental Edge in Trading, by Jason Williams, with a foreword by Larry Williams.  Larry is a world famous futures trader.  Jason is his Johns Hopkins-educated psychologist son.

I highly recommend it, not just to improve your trading skills, but just to find out more about yourself.

It relates the Big Five Personality types to trading.  I’ll explain what they are in a bit.

After I had read the book – which took one sitting – I emailed Dr. Williams to ask him if he’d perform the Big 5 Personality Test on me.  He kindly replied that he didn’t do that anymore, thanks to the flood of requests!

But luckily enough, some newly famous Canadian psychologist put the test on the Internet.  His name, of course, is Jordan Peterson.

Understand Myself is a great place to take the Big 5 Personality test cheaply.  It costs $9.95, and to me, that’s nothing compared to what you can learn.

The Big 5 traits are neuroticism, extraversion, openness, agreeableness, and conscientiousness.  I won’t go through all 5, just the ones that are particularly relevant to trading.

We’ll do this through my scores, without TMI (too much information).

To absolutely no one’s surprise, I’m highly extroverted.  Abnormally so.  I like to hang out, drink beer, tell jokes, and party the night away.  But let’s define extraversion as a psychologist would: it’s sensitivity to good things happening.  Basically, when good things happen, I feel really good.

Also unsurprising to me was that I lack conscientiousness.  Unfortunately for me, this is a very important trait for success.  I’ve often bragged about being a “big picture” person, but when you lose the details, you lose opportunities.  And when you take your eye off the market, it may take your head off in return.

What was incredibly surprising to me at the time was my neuroticism score.  It’s off the charts.  Like you probably do, I defined neuroticism with a picture of a lonely woman with dozens of cats who keeps the wine glass in the fridge with a red wine bottle.  But that’s not neuroticism at all.

How do psychologists define neuroticism?  It’s the sensitivity to bad things happening.  It’s the evil twin of extraversion.  And when things go bad, I get sent down.  I’m the complete opposite of one of my boyhood heroes, Joe Montana.  Nothing ever bothered Joe Cool.  I weakly wallow for far too long.

What does that all mean?

Well, for one, I should come with my own VIX index!  I get really happy and then really moody.  And thanks to my lack of conscientiousness, I forget to do what needs to be done.

Is it all bad?

Absolutely not!  In fact, taking that test changed my life because I knew exactly where I needed to make improvements.  (And I stopped wondering how the heck I got into Mensa.)

So here are some concrete improvements I made, thanks to this test:

Just those 3 little improvements have made a huge difference.  Heck, I just closed out a two-and-a-half bagger this week.  It doesn’t mean I win every time.  It just means I don’t lose stupidly most of the time.

I hope you’ll pardon me if I overshared.  But if you think you can improve your trading, but don’t know how, start with you.  You may be right there, closer than you can imagine, and just need a little tweak.

Though I can’t give personal financial advice, I’d love to hear from you about this.  Email me at asksean@paradigm.press.

Psst... This is exactly what we expected...

Inside, a range play on SLV…

Is Apple the Biggest Fraud on the Stock Market?

Let’s get some money off them today...