Usually, I’d say something like, “Grab a cup of joe…”

But after watching the Clueless One bumble around for another week, I’m sure you’ve had your fill of old Joe.

Talk about a one-legged man in an ass-kicking contest!

Let’s go through three utter policy failures that the Delaware Unaware has to fix immediately, suspiciously looking like 45.

Bill Burr is one of my favorite comedians.  I think he’s hilariously funny and quite intelligent with his humor.

He’s a chip off of George Carlin’s block, but not as measured in his delivery.

Watch this clip of him ridiculing Trump for wanting to build the wall.

Not to get too deep here, but Hans-Hermann Hoppe addressed this very issue in his introduction to The Myth of National Defense, a series of essays on the subject he edited.

Two of the most widely accepted propositions among political economists and political philosophers are the following:

First: Every “monopoly” is “bad” from the viewpoint of consumers. Monopoly here is understood in its classical sense as an exclusive privilege granted to a single producer of a commodity or service; i.e., as the absence of “free entry” into a particular line of production. In other words, only one agency, A, may produce a given good, x. Any such monopolist is “bad” for consumers because, shielded from potential new entrants into his area of production, the price of his product x will be higher and the quality of x lower than otherwise.

Second, the production of security must be undertaken by and is the primary function of government. Here, security is understood in the wide sense adopted in the Declaration of Independence: as the protection of life, property (liberty), and the pursuit of happiness from domestic violence (crime) as well as external (foreign) aggression (war). In accordance with generally accepted terminology, government is defined as a territorial monopoly of law and order (the ultimate decision maker and enforcer).

That both propositions are clearly incompatible has rarely caused concern among economists and philosophers, and in so far as it has, the typical reaction has been one of taking exception to the first proposition rather than the second.

Before we get into the utter futility of Biden’s southern border policy, let’s get back to first principles.

If all the property on the southern border was privately owned, do you think those landowners would just let strangers trespass on their property?

Then why has it been acceptable – even lauded – to allow both Mexicans and non-Mexicans to cross the border with impunity?  And after that, allow those trespassers to dip their hands in the communal treasury?

Because no one owns the land?  Because the treasury is now the property of the U.S. Government and not The People?

What magical powers have been conferred on this government to make it The Government?  And who granted those powers?

When you think about it that way, it’s preposterous to assume governments anywhere should – and do – carry out that duty.

What’s troubling is that the EU knew Syrians weren’t the only ones crossing the Turkish border into Europe.

The US is experiencing the same disaster now from Mexico.

Check out this graphic from a few years ago: 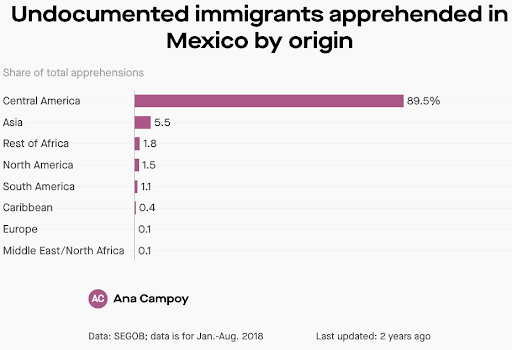 If this was happening during the Trump Administration, how many non-Mexicans do you reckon are flooding through the southern border today?

To be sure, Mexicans are the majority group.  But traffickers know what they’re doing, and would-be migrants spot the opportunity.

Why wouldn’t would-be terrorists head that way?  Much better than a background check before getting on a plane, isn’t it?

With all this said, while Sleepy Joe isn’t building the wall, he looks to re-adopt the Trump-era policy of Remain in Mexico.

It’s little wonder, as his current policy is a complete failure, judging by this chart: 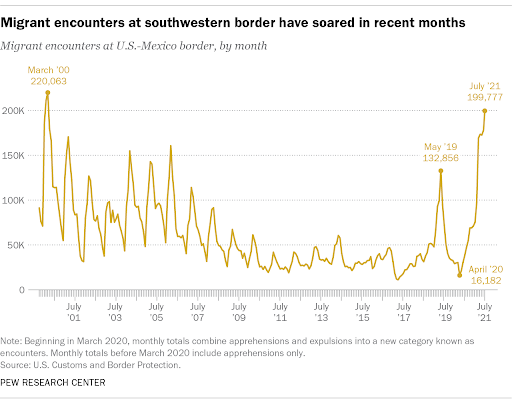 Inflation is Not My Friend…

No, inflation is not good.  Ever.  Even a little bit, like the 2% central banks try to attain every year.

As the supply chain problem increases, prices are going up and up.

Now labor unions are kicking up a fuss, and who can blame them?  It’s never been a better time to be a union member.

And paying people to stay home hasn’t helped matters.  As a result of this stupid policy, the US is currently wading through the morass of a labor shortage.

We all like getting paid more.  And most bosses don’t mind paying more for more productivity.

But if they continue to strike, the lack of supplied goods will continue to drive up the very prices working are trying to overcome.

Even asset owners who’ve benefited most from this inflation may soon come to rue the day.

Frack You!  Gas Prices Need to Come Down!

The most incredible hilarity of them all is that Joe “What’s Economics?” Biden may finally have realized what a blunder he committed when he closed down the fracking industry in the U.S.

How are those oil prices, Joe?

Perhaps no one whispered in his earpiece that fossil fuels provide 80% of US energy.  Or that the U.S. is now the world’s largest oil producer.

Far from “transitioning away from the oil industry” as he planned, the Prez manned up and faced the ultimate humiliation.

Thanks, Reuters, for this magnificent headline:

“We are closely monitoring the cost of oil and the cost of gas Americans are paying at the pump. And we are using every tool at our disposal to address anti-competitive practices in U.S. and global energy markets to ensure reliable and stable energy markets,” a White House official said.

As my British friends are wont to intone: Ha Bloody Ha…

I thought Joe Biden was an idiot 30 years ago, and part of me can’t believe that so many Americans voted for him.

Many were too young to have seen Joe in his congressional “prime.”

Sadly, they’re paying the highest costs now, as inflation hurts the poorest the most.

Biden’s administration is a shocking failure, and I expect him to get kicked hard in the 2022 midterms.

Until then, prepare for higher prices.

And try to forget all this and have a great day ahead!

The story of a would-be crypto trillionaire didn’t go as he hoped. But at least we can learn an important lesson from his wild emotional rollercoaster… And it’s important no matter what assets you’re invested in. 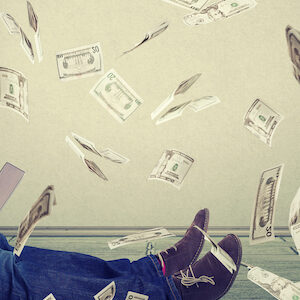 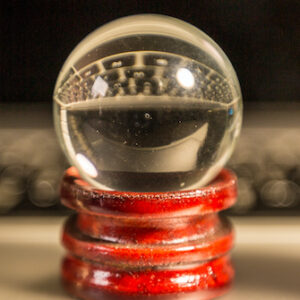 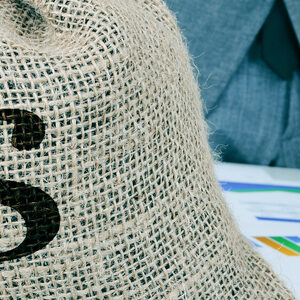 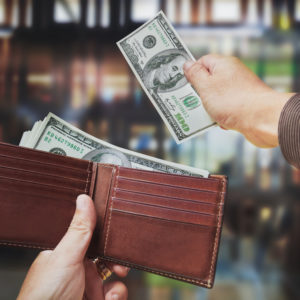 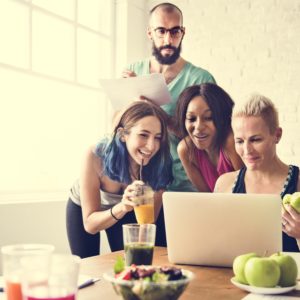