We’re leaving Calbayog City this evening for the overnight boat back to Cebu.

It’s been a great time, seeing the family, enjoying the cuisine, and drinking the Red Horse.

On Saturday night, I happened to be up at 2 am Phils time.

I was knocking back a few Horses with my buddy Teng, when Addison messaged me.

I never reveal the contents of such messages, but let’s say they weren’t complimentary.

Jotatohead Biden was about to give a speech in Europe.

I couldn’t be bothered to flip onto YouTube, so I left it.

Sunday morning, I woke to a load of texts from a few friends wondering what the hell just happened.

I, myself, couldn’t believe the misstep.

Either the guy speaking into Biden’s earpiece got it wrong.

Or, much worse, Joe started listening to the other voices in his head.

And then, much to the chagrin of Planet Earth, Biden spoke the words he heard.

“For God’s sake, this man cannot remain in power.”

I remember watching TV in our basement when I was a kid thinking, “This guy’s an idiot.”

I also remember thinking, “At least he’s from Delaware, so he’ll never be President.”

That was before I was aware of how stupid New Jersey voters are.

It was around the time Biden got caught plagiarizing a speech from Neil Kinnock, the Welsh politician, and perennial loser.

It wasn’t like this was the first time Biden got caught cheating.

He got caught plagiarizing at Syracuse’s law school. He admitted the plagiarism, and failed his course, but was allowed to retake it.

Hilariously, Sky News wrote: “Joe Biden, who has announced he is running for US president, is best known in the UK for ripping off a Neil Kinnock speech.”

“Why am I the first Kinnock in a thousand generations to be able to get to university?

“Why is Glenys the first woman in her family in a thousand generations to be able to get to university?”

“Was it because all our predecessors were thick?”

“Why is it that Joe Biden is the first in his family ever to go to a university?

“Why is it that my wife who is sitting out there in the audience is the first in her family to ever go to college?

Is it because our fathers and mothers were not bright?

“Is it because I’m the first Biden in a thousand generations to get a college and a graduate degree that I was smarter than the rest?”

And what about this nugget, regarding his soon-to-be boss, Barack Obama:

“I mean, you got the first mainstream African-American who is articulate and bright and clean and a nice-looking guy.”

Usually, I love when regulations get pulled.

But not when they come with an expensive bailout every decade or so.

Perhaps the most damning comment came from former Defense Secretary Robert Gates, who wrote in his book:

“I think he has been wrong on nearly every major foreign policy and national security issue over the past four decades.”

Oh never mind, the Taleban are still in charge.

Oh never mind, it’s not really a US vassal state after all. 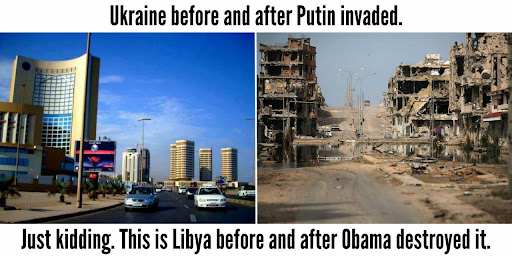 Oh never mind, Bassar al-Assad is still in charge there.

I know some Rude readers are ex-military, but it must be said…

…the military record of the United States in the 21st century is one of complete and utter failure.

So what the hell does anyone think the US is going to do in Russia?

And this has been my point from Day 1.

Russia won this war before it began and nothing coming even from the mainstream US news contradicts this view.

Why didn’t they take Kiev yet?

You don’t destroy that which you intend to own.

Is it churlish of me to point out that right now, after this invasion, Kiev still – still! – looks better than the city formerly known as Minneapolis?

It’s not like Putin called CNN and said, “Put your cameras on this – it’s going to be some light show!”

You know, like the USG did for the invasion in Basra.

The fact is the West was caught out.

If they weren’t, all NATO countries would’ve been spending 2% of GDP on defense long, long before Russia made its move.

Instead, Europe let the US taxpayer fund European security in exchange for a huge export market,

And the Europeans got its bloated welfare state thrown in, for good measure.

Those days, my friend, are over.

But it’s not going to shake out like most think it will.

America is ready to fight Russia, down to the last Ukrainian. 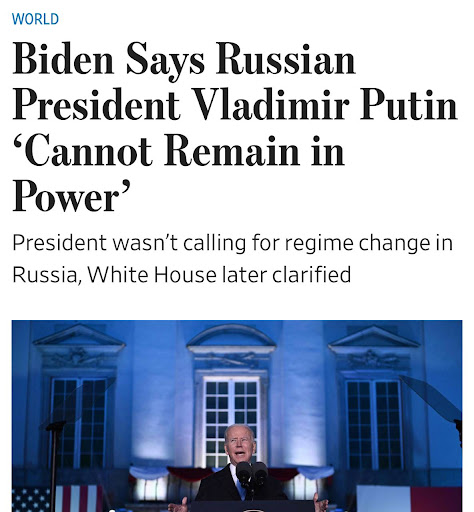 Of course, after Mr. Poopypants lost it, his advisors soiled their shorts as well.

ZeroHedge has been having all the fun since the speech, so let’s have a look:

The Bloomberg headline which pointed out the obvious: that Biden did issue a statement clearly pointing to regime change…

JUST IN: President Joe Biden called for regime change in Russia, saying in a speech in Poland that Vladimir Putin “cannot remain in power” after the Ukraine invasion https://t.co/nieYE8eGn6

Update(1435ET): Quite awkwardly and bizarrely, and a mere minutes after multiple headlines hit which emphasized that Biden just called for regime change in Russia with the words “this man cannot remain in power” in reference to Putin, the White House is seeking to clarify that supposedly it was “not” a call for regime change:

White House official explains what Biden actually tried to say: “The President’s point was that Putin cannot be allowed to exercise power over his neighbors or the region. He was not discussing Putin’s power in Russia, or regime change.”

White House official: “The President’s point was that Putin cannot be allowed to exercise power over his neighbors or the region. He was not discussing Putin’s power in Russia, or regime change.” https://t.co/SGy7zJLydD

This is why you don’t let demented old hacks sit in the Oval Office.

Is anyone going to argue Trump’s tweets were worse than this?

Diplomats and leaders are the faces of their countries.  They must be measured in all things.

But here’s the problem: even if Joetatohead gets removed from power for senility, what are we left with?

A cackling cow with no clue!

Kamala Harris – and I can’t believe I’m writing this – is even less qualified than Biden to run the country.

She was only chosen for her demographic profile, not her skill set, which is meager enough.

Claiming to be the land of the free and the home of the brave while you’re conducting yourself in this fashion is not to be borne.

We must hope for a Red Wave in November – if we make it that far – and then some serious foreign policy heft.

And I’m not talking about getting the CFR to run things.  They have already – into the ground!

We need people in the government who understand raw materials, commodities, logistics, supply chains, and the inflation that occurs when these are mismanaged.

Like all industries, it’s time for the government to upskill.

What we’ve got running the world right now is incompetence masquerading as omnipotence.